When pull scales are used for pull test and for force testing applications, the following features are important: 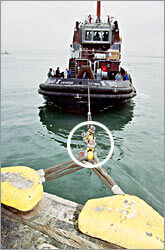 2. RON dynamometers and pull scales have a standard remote display that enables safe and convenient reading of the measured values.