Manufacturing processes often involve lifting activities. Crane scales, load cells, dynamometers and hanging scales enable the lifting stages to be utilized for weighing the lifted loads, instead of taking them to be weighed separately.

Manufacturing processes often involve lifting activities. Crane scales, load cells, dynamometers and hanging scales enable the lifting stages to be utilized for weighing the lifted loads, instead of taking them to be weighed separately (for example, on truck scales in the yard). 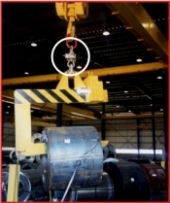 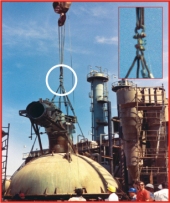 1. When cutting steel rolls, the raw material is lifted and carried to the cutting machine. Overhead crane scales and hanging scales enable the rolls to be weighed before and after they are cut. The information obtained is important for both manufacturing and inventory management and illustrates the utilization of existing processes for improved efficiency. RON dynamometer, load cell, crane scale and hanging scale series have several unique features that make them especially suitable for this type of application:

And other important features. 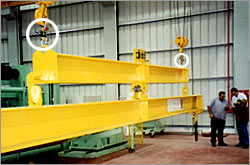 3. In hot temperature industry applications (foundries, etc.), overhead, wireless, hanging crane scales are used during the casting process for weighing foundry ladles while they are being lifted.
Weighing the ladles filled with molten material enables the addition of an exact percentage of additives which is very important in this industry. Weighing the foundry ladles also prevents potential wastage or damage caused by excess molten material.
RON wireless hanging scale, crane scale, dynamometer and load cell series offer several unique features that provide important benefits to users. These benefits are possible thanks to the latest wireless technologies integrated in the RON 2501 series of wireless crane scales, dynamometers and hanging scales.

4. Shipbuilding: During assembly, each section is weighed by hanging crane scales as it is lifted, and thus there is no need to weigh the whole vessel in order to determine its total weight on completion. RON crane scales, dynamometers, hanging scales and swivel hook crane scales are especially suitable for this purpose thanks to their water resistant and dust sealing properties.

In addition to all the above benefits of cost reduction and improved efficiency, RON Crane Scales, Dynamometers and hanging scales enhance safety as they help to detect and prevent dangerous overload situations.