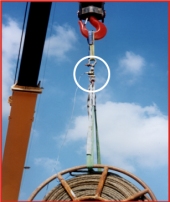 Industrial dynamometer, hanging scale, crane scale and load cell series are used for shipment weighing, when the lifting stage in the loading and unloading procedure is also used for weighing. Knowing the exact outgoing or incoming shipment weights help manufacturers and service providers to improve efficiency and reduce costs.

Data logger: Enables logging of all measurement values (with or without the exact time they were recorded) and printing them at a later stage.